To those who have no first-hand experience, it’s easy to see addiction as a point of weakness. After all, how hard is it to just put down the bottle, stop using drugs, or stop eating so much?

In reality, the answer is, of course, more complex. Addiction isn’t a simple personality flaw as many people believe it to be; it’s an illness that requires professional assistance to treat. Those suffering from addiction are unlikely to change without guidance and medical intervention, just as with any other disease.

Like many conditions, including diabetes and heart disease, addiction is caused by a blend of behavioral, environmental, and biological factors. Addictive personalities even run in families, whether through nature or nurture, predisposing many individuals to struggles with addiction. Those suffering with addiction often have little control over their behavior, compulsively seeking out pleasurable activities regardless of any harmful consequences.

Addiction is a life-long condition that cannot be cured, only controlled. If you or someone you love is struggling with addiction, it’s important to fully understand the disease of addiction, and how to treat it accordingly.

Understanding addiction as a disease is the first step to taking back control of your life. 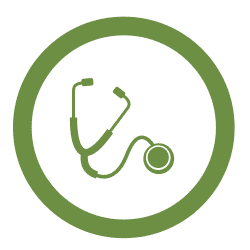 22% of mental health cases also have substance abuse disorders associated or contributing to the severity of the problem.

The National Center on Addiction and Substance Abuse is one of the leading independent research bodies in the United States, offering resources and support to aid those struggling with addiction. This organization, as well as the American Medical Association and the American Society of Addiction Medicine, categorizes addiction as a disease due to the role of behavioral choices, genetic factors, and environmental influences in its development.

Further, addiction involves changes in both the body and the brain, creating physical and mental layers of dependency that can worsen and even prove fatal over time.

Some people argue with the premise of addiction as a disease due to the element of choice. Since getting started requires engaging in an activity that is known to be addictive, like drinking heavily or trying drugs, addiction cannot appear spontaneously like many other diseases do.

However, this is not sound logic. Numerous illnesses and life-threatening conditions, like lung cancer, skin cancer, and diabetes are directly related to an individual’s choices, like choosing to smoke or choosing to sit outside in the sun without sunscreen, but these issues are certainly not debatable as diseases.

Addiction may be the result of choices, but this does not make it any less of a credible illness deserving of treatment.

Addiction appears in many forms. When many people think of addiction, it’s common to refer to the more popular substances like alcohol, heroin, or cocaine, but addictive behavior can involve a wide range of different substances and activities.

In fact, nearly every pleasurable activity, from eating to shopping, has the ability to trigger an addiction.

Illicit substances do indeed make up many cases of addiction. Approximately 24 million Americans are addicted to drugs or alcohol, and, in some areas, this figure is only on the rise.

The heroin epidemic sweeping the United States is evidence of this; death from heroin overdose is up 45 percent since 2007. However, drugs are not the only substances to which individuals can be addicted.

Non-illegal substances can be highly addictive as well, creating problems for millions teens and adults across the country. Approximately 3 percent of those who have tried gambling are addicted.

It is also possible to develop obsessions with recreational activities, like video games or exercise.

For those with an addictive personality or who use outside factors to cope with stress, addiction is always a possibility for any fun or exciting hobby.

Get the Right Type of Treatment that Suits Your Needs

Learn about the addicted brain and find confidence that you can manage your addiction once you embrace living in recovery.

The power of addiction is primarily related to its effects on the body. Addiction is not just psychological; addictive substances can actually change the way your brain functions.

The brain controls human activities, using a series of signals to satisfy the body’s basal needs. For example, a dangerous situation, like a hot stove, sends pain signals to deter further contact, while fulfilling basic needs, like eating and sleeping, stimulates pleasurable sensations. Over time, these signals grow to affect all areas of life, using past behaviors to determine future motivations. This mechanism can cause changes in how the body processes stimulation, choosing to put great emphasis on substances or activities that provide above average levels of pleasure.

In time, this pattern of pleasurable signals can create a dependency on these activities, resulting in the initial stages of an addiction. When this occurs, individuals must have access to these substances to feel normal, triggering intense desires and cravings that are extremely hard to overcome.

Many Substances take this concept one step further and actually change the way the brain releases and uses neurotransmitters like GABA and dopamine. Excessive drug and heavy alcohol abuse can negatively affect the structure of the brain, leading to a physical addiction that may require medication to reverse or mitigate.

The correlations are strong indeed, with nearly 8 million Americans facing both mental health challenges and addiction. The presence of one or more mental disorder can greatly complicate treatment for addiction, especially when there is no clear way to tell which condition predates the other. In some cases, addiction leads to anxiety or depression, while in others, these kinds of conditions result in abusive behavior that ends in addiction.

According to the Substance Health and Mental Health Services Administration, those with mental disorders are significantly more likely to develop an addiction. Numerous disorders can co-occur with addiction, including:

Treating a dual diagnosis involves addressing the symptoms of mental illness as well as the root causes of addiction, helping to target dependency at the source. While not easy, a counselor trained in co-occurring disorders can provide great relief for those in need, working with both conditions simultaneously to see an improvement in overall health.

Only 14% of individuals with a co-occurring disorder receive treatment addressing both their substance abuse and mental health issues.

Get the Quality Treatment Needed for a Brighter Future

The Cycle of Addiction 4 Main Stages

Addiction, despite its complexities and varying forms, can be broken down into four simple stages: experimental, recreational, early dependency, and full dependency.

Need more help? Give us a call

SPEAK WITH A PROFESSIONAL

Empower Yourself with Knowledge from Reputable Sources About Drug & Alcohol Addictions

ABTRS believes in the importance of using reputable sources when communicating with our patients and their families. We have crafted all our information, treatment modalities, statistics, and practices on reliable resources that are supported by data and scientific methodology. We utilize information that is impartial, not funded by organizations that could benefit from certain outcomes, and proven or tested to be effective for substance abuse treatment and aftercare.

Below are the sources used to construct the content on our website and all written material from ABTRS. We pride ourselves on offering anyone who is seeking treatment for themselves or a loved one with knowledge from reputable sources that are up to date and relevant.

NIDA. (2018, July 20). Drugs, Brains, and Behavior: The Science of Addiction. Retrieved from https://www.drugabuse.gov/publications/drugs-brains-behavior-science-addiction on 2019, February 18